Yoga came his way during his studies during a trip to India. This made a deep impression on him and decided to explore the spiritual life in India and especially the Bhakti yoga tradition. This resulted in years of traveling back and forth from the Netherlands to India, and a large part of the time in India to stay in an ashram.

Arjuna van der Kooij works as an editor and writer of yoga books at Mandala Publishing. Together with co-author Alanna Kaivalya, he has published the book Myths of the Asanas, which brings the stories behind the asanas to life.

Gandhi once said, “Be the change you want to see in the world.” The wisdom of the yoga tradition, as expressed in texts such as the Yoga Sutras and the Bhagavad Gita, can shape that change in an even better way: “Be the change the world needs“.

He gives workshops on yoga philosophy and organizes yoga retreats to India and Switzerland. Mantra meditation and kirtan form an integral part of this. 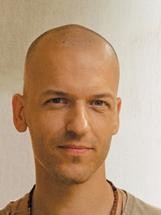 BECOME A MEMBER AT THE YOGA ACADEMY?

Then register via the button below

WANT TO KNOW HOW MUCH IT COSTS?

We use cookies to ensure that our website runs as smoothly as possible. If you continue to use the website, we will assume that you agree.Ok